Trying to make good on a long overdue promise Dad and Graham set off to do reconnaissance on the Eiffel Tower, a trip that had failed spectacularly on the last two attempts due to logistical breakdowns and surprise crowds.

This time the logistics were fine, the crowds were limited, and the top of the tower was closed for another three weeks...

Moving to plan B -our clothes horse (Eli) went out to shop with Mom, while the rest of the men took the dogs to the nearby Bois de Boulogne (parisian equivalent of central park) to enjoy the relative warm. Apparently the dogs were excited by the good weather also, and even more enthusiastic about greeting the many other dogs - and managed to knock down both Lincoln and Graham in the process. When we arrived at the dog park we let them off leash and had a good game of chase which lasted perhaps thirty seconds. At that point Cameron (the daughter - almost a year old now) - noticed another labrador playing far far away at the edge of the large duck pond.

In a signature flash of black and pink (her harness) - she covered the 200 yards or so like a cheetah, finishing the charge with a nice dive into the still half frozen duck pond. Excited well beyond the point of being subject to reason, I paced the perimeter listening to snippets of amused conversation from dozens of amused bystanders about the "duck hunter" - "adventuresome lab" the "very warm blooded and persisten dog" etc. etc. while she swam back and forth for fifteen minutes somehow hoping to surprise the fowl... When she finally heeded one of my calls and came out she was cold and contrite, but too happy for me to be genuinely mad at her.

Once she was recovered we set off for home, both dogs dutifully trotting alongside, while Lincoln veered off on his scooter to explore the play equipment... and so goes a day at the park 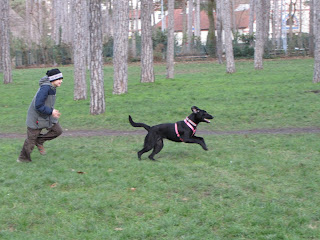 View of still unscaled Eiffel Tower from the park 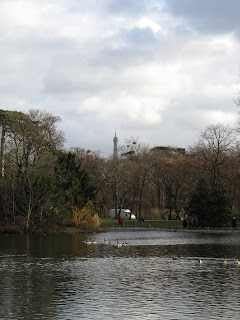 Boys and dogs at a calm moment 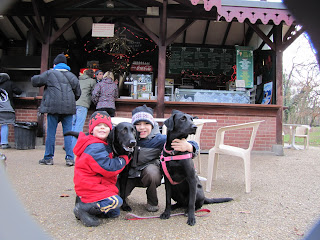 The Duck Hunter at work 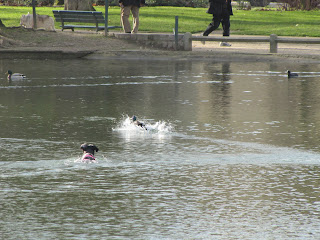 The quest for snow was launched with an exercise in precision packing and planning, the car preloaded, toy bags packed, jackets, mittens, hats and mufflers placed at the ready. Rising at 0600, the team got off to a clean start, exiting the apartment and entering the garage without tangling the leash lines or losing anybody. The car was quickly unlocked and loaded, when solo Dad suddenly found himself without car keys (the ones just used to unlock). A frenzied search came up empty, and a replacement set was obtained by a quick dash to the apartment.

Once underway things went well, with an uneventful 6 hour drive to our destination punctuated by an aborted IKEA run (the building was a distribution center not a store) followed by a successful stop to get plastics sleds. In the final half hour we finally spotted snow, and the excitement level went to overdrive. As we took the road up the mountain up towards our hotel it was becoming evident that the snow line was going to be just above us. After letting the dogs take a joyful romp in a huge open field and checking into the cozy hotel we set off again seeking higher ground. As the miles went past and the road stayed at the same altitude the reminders that "Daddy never promised snow" started coming fast and furious. Then we rounded a bend and saw a nice basin covered in heavy frost. I pulled over and out tumbled the kids, sleds and dogs. Frost makes for a great sledding hill, but isn't so good for the crashing... In other words - Game On!

After using up the last of our daylight on the hill we went back to the hotel, dried off, and went down for dinner. We ended up with a heavenly fondue, supplemented with pasta and milk to fill up the less refined palates. To my surprise and relief, the exhausted dogs remained silent and calm in our room (above the dining room).

At the insistence of our dedicated snow hunters the next day was dedicated to the search for deep snow - and it took us a good way further into the alps, past Albertville (Winter Olympics) - and up a small windy road I hoped would eventually cross that magic threshhold. It did quickly get very slippery, and after briefly regretting the sale of our four wheel drive vehicle, I opted for sanity and pulled over to the side as the grade increased. We had reached some snow, and had a good bit of ice, which also makes for a good sledding experience, so we hit the slopes again, the boys keeping in close communication with walkie-talkie watches. After a few runs the instinct to do battle took over, and we dedicated ourselves to the very time-consuming task of scraping together enough snow (which was maybe 2 inches deep) to make a snow fort, and then having an extended battle in which solo Dad was predictably defeated.

Then we took another drive/warm up break - and found a route that did lead to deep powder! We stopped next to a breathtakingly beautiful little town and quickly resumed our battle, taking advantage of a winemaking hut which became a hotly contested fortress. Then the sleds came out again, and the boys learned about the tradeoffs of deep snow and speed.

Predictably, Lincoln (4) managed to get up a lot of speed when I was least expecting it, and was on track to launch himself into either A) our parked car, B) the road or C) over the embankment on the other side and into a mountain stream. Solo Dad leaped into action, and managed to "save the day" by flipping the sled, leaving Lincoln snow covered and crying, and Solo Dad nursing a bruised rib. The day on the mountain was wrapped up with a stop to farmhouse that could have come out to the 17th century where I bought a huge chunk of goat cheese for a song.

The ride home was long and trying - with various punishments awarded and threatened for the usual infractions. Having used up my repertoire of threats for our biggest delinquent (Lincoln) - I warned that he could lose dinner itself. Unfazed he assured me that he would make his own dinner, and that Optimus Prime would help him. This was followed shortly by a request that we buy some champagne to share... Apparently going to French school is working better and faster than we realized!

We got back to the hotel late, enjoyed long baths and then opened the window to discover that a thick snow was falling - an event celebrated with sprinklers and dessert.

On our final morning we tried out two different sledding hills on the fresh powder before packing up and heading back to Paris, where Solo Dad takes on the real challenge - cleaning up. 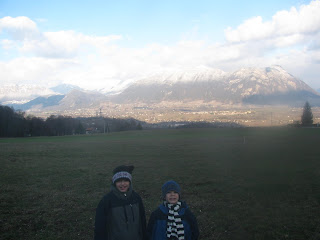 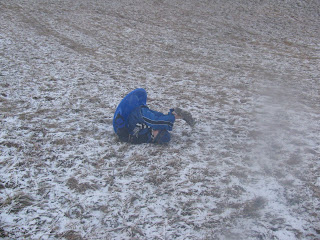 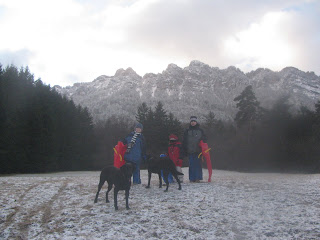 View from our Hotel 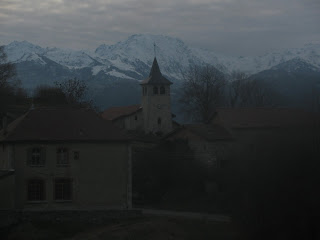 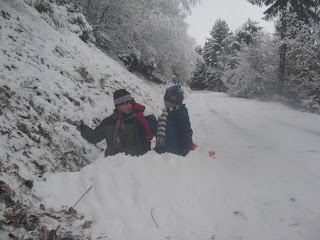 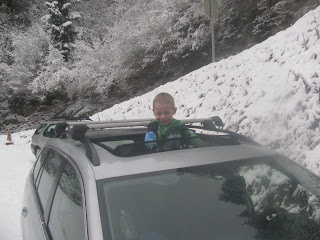 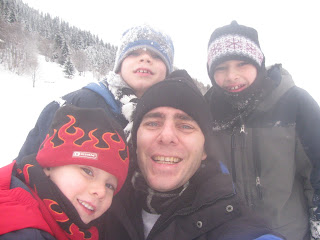 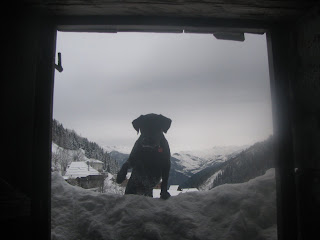 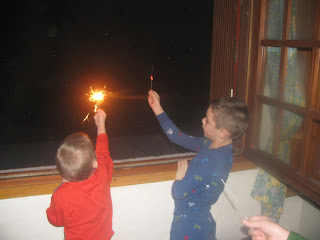 Before the snowball fight... 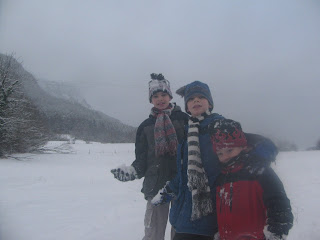