Hi Everyone
Really sorry to have neglected the blog for so long. Soon as we got a camera back our laptop broke, and the the whole country fell to peices. Pretty depressing actually to come back from an evacuation in Chad and head down the same road in Cameroon... Oh well - I guess it comes with the territory. To summarize - the country has deep social and political problems and a minor protest snowballed into serious violence that threatened to spiral out of control. Order has been firmly re-established through use of force and threat and things are stable again, but it has become more difficult and unlikely that the government will be able to solve the underlying issues, and develop into a genuine democracy. Sad, but not hopeless.
Anyhow - the family is well - looking forward to the end of school - and visiting home, particularly our new cousin/nephew Jackson Frey. I should also note that we worked out how to webcam (bandwidth makes it pretty grainy, but better than nothing). So drop a line and the Swaney boys will be happy to put on a show.
With pictures being worth a thousand words and all - I think I'll shut up and post some of our latest shots.
In what was probably our best trip yet - we had the honor of witnessing and participating a bit in the wedding of our driver/gardener/surgical assistant/friend Richard and his bride, Doris. It was a long bumpy drive out to their town, but well worth the effort to see their rich traditions, meet their families, and see the joy of a sound union, which I suppose is universal
The Swaneys 5 with the bride and groom and son Thierry 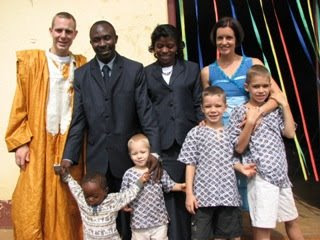 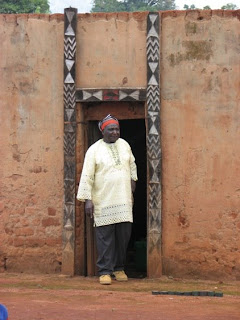 This was at a part in the traditional wedding ceremony when the family of the bride rejected the union, pretending that they were unwilling to part with her because she is too special, is part of a set of twins, her would-be-husband is unworthy etc. - all of which is resolved with a few small gifts to mother and grandmother and character testimonials (by Bill among others) that Richard will be a good provider etc. etc. - Kristie and Lincoln meanwhile made friends by playing with babies. Interestingly, while our youngest is still in training to fight in the Thunderdome from the Mad Max series, and routinely beats up his brothers, he is very sweet with the babies - which gives us some hope that he is not beyond redemption... 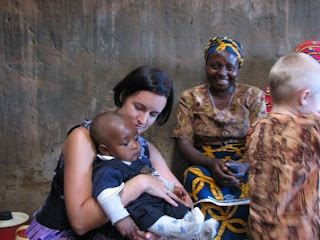 Lincoln was quite the novelty for the Cameroonians, and enjoyed every minute of it. He chatted up the chief/Minister of the Peace and sat himself down in the middle of the action. 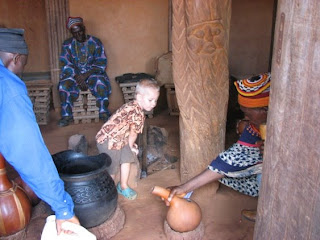 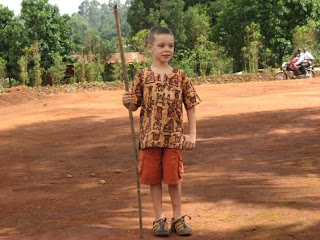 Graham was the official photographer for the event, and his work (like the photo above) will be gracing these pages in days to come 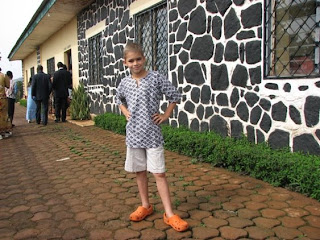 We're also happy to report that the boys have now crossed over the 50 percent mark, and are spending more time as best friends than as worst enemies (though our calculations are preliminary)... 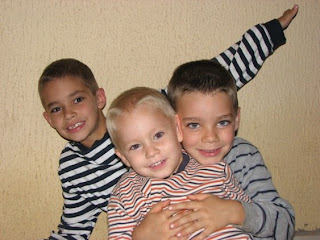 Anyhow - that's enough for now - please do keep in touch - we miss all of you and look forward to catching up soonest
All the best
The Swaneys
Posted by Contact me at 1:38 PM No comments: